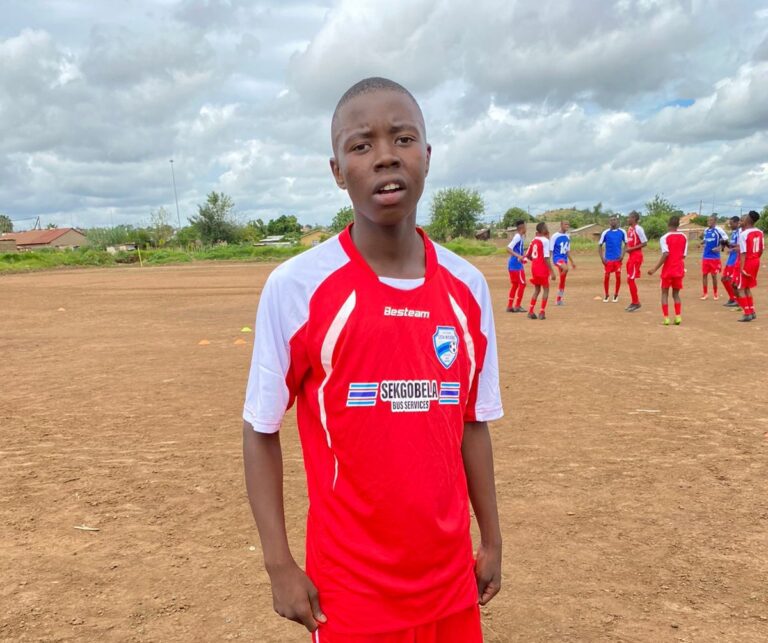 Born and bred in Soshanguve Extension 2, Mlungisi Harvey Mamyala has been a sensation this season. The 18 year old Sosh Movers central midfielder has been one of the must watch in the SOLFA super league helping his team maintain top spot on the log.

His football journey began at the age of 6 where he spent most of his time playing street football with his friends. Mamyala revealed to Tshwane Bulletin that he had always believed in his capabilities as a player from a young age, further adding that his style of play has been appreciated.

“ When I began to play for my primary school Itumeleng  Madiba, that’s where I probably got to impress my coaches and teammates I was even nicknamed Professor and that happened to be my breakthrough because the love and support was on another level so yeah that’s when I knew that I’m heading somewhere with my talent,” Mamyala

Mamyala has been at Sosh Movers FC for 11 years now and reflecting on his years at the club the 18 year old thanked the club for the opportunity and impact it had on and off the field.

“Till this far I can proudly say that Sosh Movers is my life, because it has played a huge role in introducing me into the world of football and now I’m well known so it’s all thanks to them”.

He further revealed that the club is one of the best locally with good development structures and support system. I have been at this club for like 11 years now, it has been a great experience till this far because Sosh Movers is one of the best and respected clubs Mo Kasi, it has the best coaches, best technical managers and even some of Soshanguve’s finest have played here”.

Mamyala revealed that it takes hard work and dedication to pull away from bad influence in order to succeed.

“I’d say dedication, it was never easy pulling away from bad influences but because I have a dream, a goal I have to work towards and work harder everyday.”

He further emphasised on the importance of family and friends throughout his career.

“The support from my family and friends has been truly insane, these people have been the pillar of my career, the number and dedicated boy you see today it’s all because of them,” said Mamyala.

Mamyala believes he’s at his peak of his career also thanking his teammates for helping him grow as player.

“Yeah I’ve been a marvel and yes I’m pleased with my performances but all credit goes to my teammates and coach. They never limit my play they only want me to be myself so I’m never shy to be the joystick /professor that I have to be in the field.”

Mamyala backs his the team to go all the way and win the super League this season also pointing out that they have used the past as mistakes as a learning curve.

“I believe it is indeed our season, we learned from our last season’s mistakes and we cannot afford any last minute mistakes again this season. So the boys are really gunning top spot and victories ahead.”

His biggest wish is to play in the English Premier League also his dream is to see himself in the gold and black Kaizer Chiefs jersey. The lad is certainly a star in the making  and one to look out for in future.