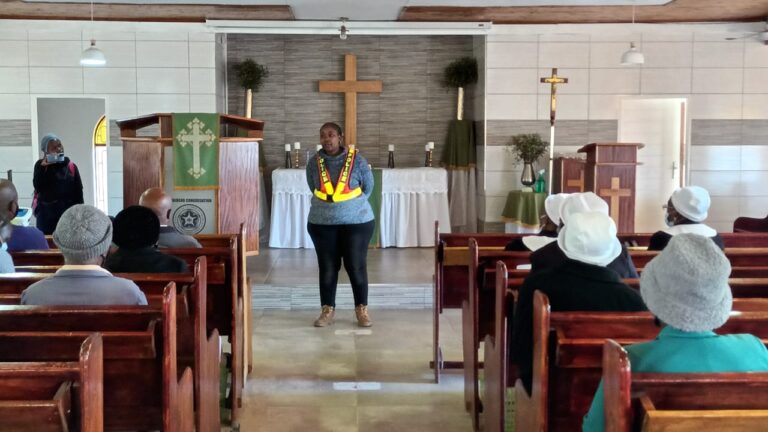 The Rietgat SAPS in conjunction with various stakeholders including the Department of Health, Social Development and Youth for Survival have this morning embarked on a Crime Safety Awareness Campaign at Lutheran Church in Block BB.

The campaign aimed to sensitize female congregants about crime patterns affecting women in particular. All stakeholders shared the platform and enlightened the congregants on domestic violence, sexual offences and Gender Based Violence and Femicide in general.

The station went further to remind the church about the Victim Friendly Facility where victims of GBV are treated exclusively in a facility detached from the Client Service Centre. This is to ensure that they open up about their ordeals while getting comfort and sympathy without disturbing other people walking in and out during the process.

The collective went on to warn the church about being vigilant since in other places churches have become victims of business robbery crimes.

The congregants appreciated the visit and vowed to share all the information received from the stakeholders. Different pamphlets were dished out as part of ensuring that the information remains immortalized and timeless.

They would like to encourage any member witnessing any criminality in their surroundings or neighbourhood should contact the police on 0716756250 or Crime Stop number 0860010111 or Station Commander Brigadier Molatelo Maphoto on 0824558236 My SAPS App Rietgat SAPS 012 432 7806.