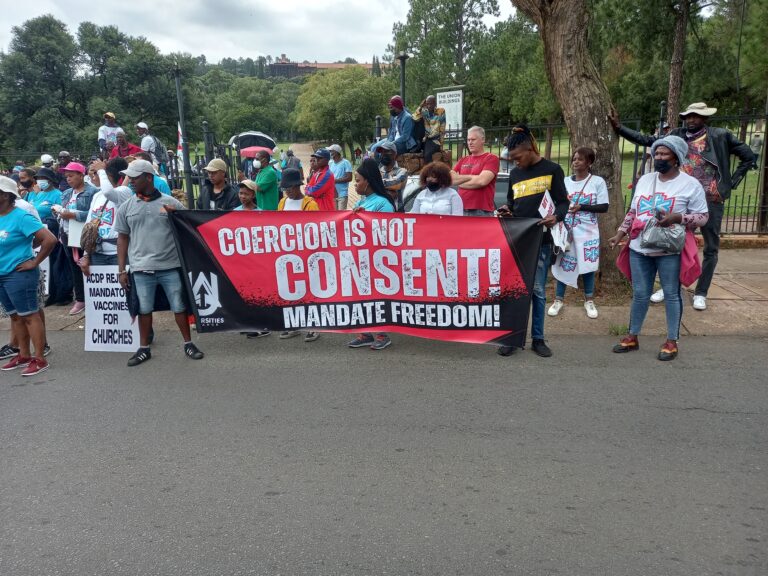 Hundreds of African Christian Democratic Party(ACDP) members, marched along side with the president of the party Kenneth Meshoe to the gates of Union Building to hand in  the memorandum to the South African Health Products Regulatory Authority (SAHPRA), and Department of Health against the mandatory vaccination of minors,  as they demanded transparency from the government.

The march was joined by different organization such as save the children, waste management in Tshwane and other political parties who are against what they believe is an experiment done on children. The party marched from Church Square to Union Building in Pretoria the march was also joined by students from higher education and training.

The Programme Director Councillor in Tshwane Thabang Moshide compared the mandatory vaccination to rape, because “an object is forced to one’s body while the ACDP Chairperson said the will no longer adhere to lockdown restrictions and that the country should move from state of emergency, the economy should fully operate.

“It is hypnotically for government to be claiming to be protecting and preserving our human rights while they dribbling on some of this rights they are using the limitation clause as an excuse to practice their unconstitutional deeds, our bodily integrity is being undermined,” said the ACDP president.

The memorandum was submitted to Dr Thulari on behalf of the Department of Health who ensured the parties leader and the members that the memorandum will reach the minister’s office, while SAHPRA was not there to receive the memorandum. The party promised to fight tooth and nail against the mandatory vaccine. Save the children on the 27th and 28th of April will be at the high court fighting against the mandatory vaccine against minors.