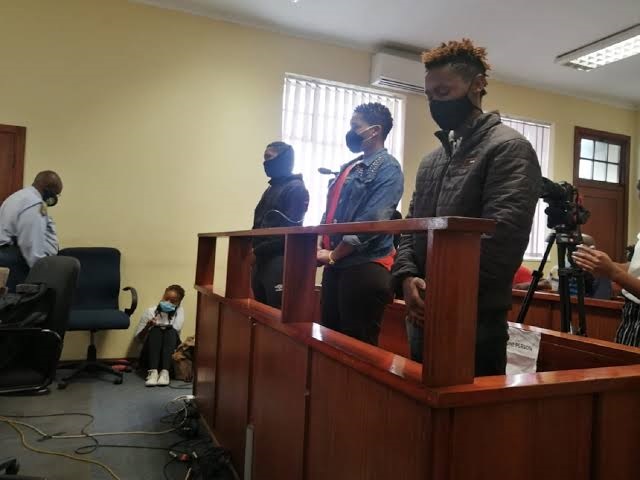 It was on 6 December 2016 when shock waves gripped the community of Mmakau in Ga-Rankuwa, after a harrowing incident which saw a police officer, his wife, a pregnant daughter and a 3-year old son all executed in cold blood.

The surviving daughter, Onthatile Sebati told the police that she heard gunshots whilst outside to dispose the water she had been using to wash the dishes.

She said she was shot after trying to investigate but the bullet only grazed her thigh. The then teenager alerted the neighbours who called the police.

She told them that she survived after pretending to be dead. Police vowed to leave no stones unturned. And five years down the line, Sebati emerged as the suspect.

According to Lieutenant Colonel, Amanda Funani of North West Police, Onthatile Sebati who is now 20 years old, went to Mmakau Police Station where she admitted to having orchestrated the plan of hiring hitmen to kill her family. She also implicated her two friends Tumelo and Kagiso Mokone who are her cousins of carrying out the plan.

“It didn’t sit well with us. We are just shocked. Even now, I don’t know what to say,” said Japhtaline Sebati, who is the accused’s aunt.

Even though the motive behind the gruesome murder is still unknown, a Psychological expert, Reema Nundlall however said that the behavior can be driven by a number of factors.

“Some of the signs that the parents fail to pick up could include unruly defiance behavior, threats of killing someone whether it was a teacher, a friend or even a family member, aggressive behavior, depression or even anti-social tendencies. These are some of the behaviours the 15-year-old could have demonstrated,” said Nundlall.

Though the confession made to police by 20-year-old Onthatile Sebati that she ordered a hit on her family in 2016 brings some sense of closure, it has also raised more questions for the bereaved.

Her father, police officer Constable Solomon Lucky Sebati, 41, her mother Mmatshepo, 40, 3-year-old brother Quinton and her eight-month pregnant sister Tshegofatso, 22, were murdered by what was reported to be a gang at the time. The shooters fled the scene with Solomon’s Chrysler Voyager, which was later found abandoned.

The department of Social Development has recommended that she be sent for psychological assessment.

Sebati and her co-accused face four counts of murder, robbery with aggravating circumstances, possession of a firearm, possession of ammunition and theft in connection with the murders of her parents, pregnant sister and younger brother.

The accused were granted R10 000 bail each by Brits Magistrate’s Court after finding they were not a flight risk, and that their release posed no threat to witnesses and police investigations.

As part of their strict bail conditions, Moolman ordered the accused not to have any contact with each other, to stay at their verified residential addresses and to report to the nearest police stations on Mondays and Fridays between 6am and 6pm.

The case was postponed to 30 March.