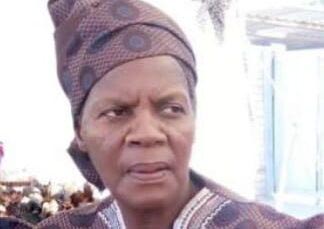 The City of Tshwane has distanced itself as it is waiting for forensics and emergency report after a pensioner lost her life after a wall collapsed on her.

Micheal Dlamini from Soshanguve Block AA, North of Pretoria the neighbour of the late nurse at George Mukhari Academic hospital in Ga-rankuwa Mrs. Thoko Margaret Mabena (67), said that the heavy rainfall that happened on Friday the 4th of February and continued till Saturday. When it stopped he went outside to clean the trees in his yard  and there was a heavy flow of water on the street,

Dlamini said there’s a storm water and sewerage system pipes on the mountain he said thinks those pipes burst due to rain, then two men came and took rocks put across the street so that they can climb the mountain it was during that time that he went to the back of his house to get a wheelbarrow so that he can pick up the refuse that he was collecting.

Tumelo his Nephew came running to the house to call him when he came out the two men told him that there’s problem the wall has fallen down.  One of the men said there’s a person lying here since the deceased was staying alone and her gates were always locked. It meant the wall fell down on her and the bricks hit her head and lower part of her face.

Dlamini further went to say that “The first thing I did when I arrived at the scene was to request the two men to assist me so that I can remove the bricks but they told me that they’re going to work so they won’t be able to help, so he went to call his Nephew who came with a plier so that they can cut wires that were on top of the wall.”

They later called emergency personnel include the Police who came to do assessment but they certified Mrs. Mabena dead on the scene and the police came to do a statement.  The problem their facing is the sewerage system that is always leaking whenever they experience a heavy rainfall in the area but they report the matter to Municipality but the problem still persists

He described the late Mrs. Thoko Margaret Mabena as a humble person who was always ready to help people around the community when neighbors had gatherings she would open her house and very vocal when it comes to issues that affected the community including load shedding

Sipho Stuurman from the from the office of the Executive Mayor in Tshwane said that he is unable to comment on the issue as he is still waiting feedback from the forensics and emergency personnel thing. He said.