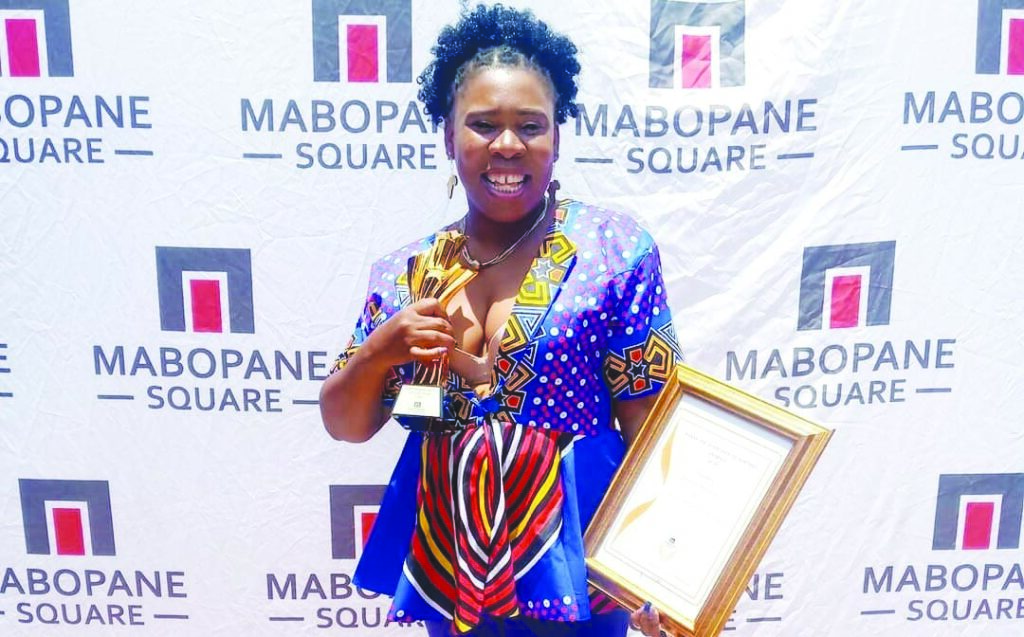 Founder and leader of Golden Youth Club, Nomatlou Mahlangu was one of the winners at the Mabopane Community Awards 2021, she was rewarded in the Best Performing Arts of the Year category.

Reflecting on the award, Mahlangu praised Mabopane Square for hosting such awards which she believed showed that they cared about the community and their impact in the centre.

“I have personally received a lot of awards on a national level, but never been recognized on a local level, so when we are recognized at home, it means a lot, charity begins at home. It was important, I’d like to thank Mabopane Square for organizing these awards to show that they care about their community because it’s part of ploughing back from their side.

She further encouraged organizers to continue focusing on grassroots level and recognize local people who are making a difference in their various communities.

She said, “It is important for people to organize local township awards, even if it cannot be awards, but the recognition of people, not just young people, who are making an impact in the communities, because some of us have been working in the community for years without getting any funding, so when you are being recognized, it shows that people appreciate what you are doing. So the local support is really really important”.

Among some of the duties she does, Mahlangu is using the performing arts to teach children about various issues, including the Sustainable Development Goals, which aim to bring peace and prosperity to all people by 2030.

“We reflect on them and turn thoughts into an artistic performance – whether it’s a song, dance or a play. Our aim is to convey that, regardless of where you come from, there is one language we can all understand,” said Mahlangu.

“For us to understand who we are and where we are going, we need to first understand our history. As African people, our education is presented through the arts, hence our club even teaches the Sustainable Development Goals through the performing arts.”

In another education drive, the club took learners on a 10-day tour of Tshwane to teach them about climate change.

“During the tour, we visited seven regions to emphasise the message of keeping our environment toxin free,” she said.

With a vision of making performing arts more accessible to audiences in SA and across the world, Mahlangu said the club offers a variety of programmes including dance, music, poetry, theatre, visual arts, fashion design and peer education.

It partners with organisations in Germany, Ukraine, Malawi, Brazil, Uganda, Egypt, Israel and Tunisia, and has travelled to some of these countries to learn about them and engage with their citizens on social issues.

Mahlangu said the arts has an important role to play in changing society and encourages parents and communities to expose children to the arts from a young age.

Her interest in young people was inspired by the African phrase ligotshwa lisemanzi, which, roughly translated, means it’s easier to train a child than an older person.

“We must encourage our children to utilise their talents, as they can be successful when they do so,” she said.

The club also promotes indigenous languages when members travel to other countries.