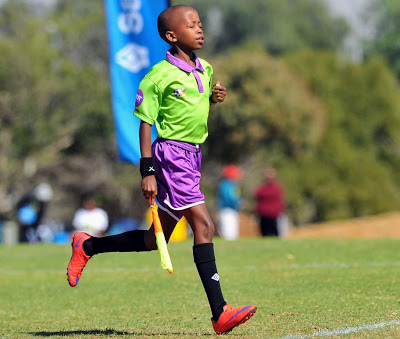 Gv of Action during the Sanlam Kay Motsepe schools Cup National Finals on the 26 September 2019 at University of Free State Sports Grounds Pic Sydney Mahlangu/ BackpagePix
Share
Facebook Twitter LinkedIn Pinterest Email
This is according to SAFA’s Referees’ Head of Department, Tenda Masikhwa, who expressed his delight over the quality of officiating which has been on display at this year’s Sanlam Kay Motsepe Schools Cup football tournament which took place at the University of the Free State in Bloemfontein.
Masikhwa was referring to the young up and coming talent in 14-year old Joseph Makgoga, Cherith Johnson, 15-year old Neo Zwane and 17-year olds Nontobeko Ngobese and Synthia Vaaltyn, in whom he was not shy to mention that they have been outstanding in all of the matches they were given a platform to serve in.
All of the above mentioned young referees served as assistant referees at this year’s Sanlam Kay Motsepe Schools Cup football tournament which came to an end on Friday.
“All these young referees we brought in this year’s Sanlam Kay Motsepe Schools Cup football tournament have been outstanding in their respective LFAs and we thought it wise to help fast track their development by bringing them in to serve on a bigger stage,” Masikhwa said.
“In this schools football tournament, R1 million was up for grabs as the first prize money and everything had to be at its highest standard, match officiating wise. I must say that I am extremely happy with how things went and that these young referees are certainly on the right track in their development.”
Masikhwa also mentioned that he was pleased with how Makgoga, who served in the 3rd/4th place playoff Kay Motsepe Schools Cup match between Khula High and John Ramsey match on Friday afternoon, carried himself in that tie; adding that the young lad from Alexandra continues to grow in leaps and bounds in his role as an up and coming assistant referee.
This was for second time young Makgoga was serving in a 3rd/4th place playoff match in a national tournament, following his fine display in last year’s SAFA U19 Women’s Regional League Women’s Championship which took place in October at the Nike Football Training Centre in Pimville, Soweto.
“The boy has been really consistent in all of the matches he has served in and I believe he will continue to grow from the level he is in now.”
Share. Facebook Twitter Pinterest LinkedIn Tumblr Email
Previous ArticleSAFA keeping the Madiba legacy alive
Next Article Golden Ladies have long term plan in SAFA National Women’s League