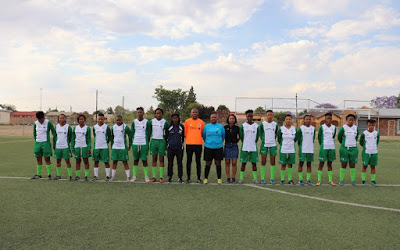 Share
Facebook Twitter LinkedIn Pinterest Email
It may only be a few weeks old but SAFA’s National Women’s League has already dished out drama, goals-a-plenty and unprecedented levels of overall excitement across the nation.
The much-hyped event has lived up to its billing thus far, with SAFA delivering on its promise to uplift the women’s game in the country and take it to levels never seen before.
The South African Broadcasting Association (SABC) has also come on board to televise live games and take the league to the people.
The Tshwane teams may have the early advantage but other clubs can never be counted out. The likes of North West’s Golden Ladies have punched above their weight and are bound to be taken more seriously in the coming weeks.
Formed a decade ago and hailing from the Ngaka Modiri Molema region under the Mahikeng Local Football Association (LFA), the team began their campaign with a thumping 4-1 win over Thunderbirds Ladies and have progressed ever since.
SAFA.net managed to catch up with the team’s owner and coach, who joked that he is also the team bus driver, Mr Junior Morake, who shared his thoughts on the National League itself, future goals as well as a quick message for the loyal supporters.
The former Orlando Pirates development coach is happy to be a part of this league.
“Look, my core function has always been development coaching and that is what led me to this team and into women’s football. I wish to help grow the game with my knowledge. So far we are enjoying our time at this level. It is indeed exciting”, said Morake.
On the team’s current form, the coach is still happy with what he is seeing.
“Yes we can be more consistent but most girls are still acclimatizing. We are improving each and every game and all my girls work hard and show tactical and technical efficiency. We have three players who play at national level so we must be doing something right,” added Maorake.
The coach also stated that he would love for someone to sponsor a bus for transport or even equipment to the team but is no hurry to go all the way in this league.
“It is a process. Once the relegation system kicks in then we must be ready but my aim for now is to be in the top eight. I am building this team one step at a time,” he said.
The big boss also discussed exactly how this league can benefit South African women’s football in general.
“This league is bound to improve SA football as a whole. It is in essence going to change lives. Corporates, sponsors, investors and stakeholders will come on board sooner rather than later and the economy itself will improve. It is a great initiative,” said the coach.
In conclusion, Morake had a message for long standing fans of the team.
“My message to the fans out there is loud and clear. We really need their whole-hearted support. Be patient with us as we are building slowly. However, fans must also rally around women’s football in general. All our ladies are important as they surpass many obstacles on a daily basis,” concluded Morake.
Share. Facebook Twitter Pinterest LinkedIn Tumblr Email
Previous ArticleYoung referees excel at this year’s Sanlam Kay Motsepe Schools Cup
Next Article Visa regime, spectrum release set to boost job creation