By Tshwane BulletinOctober 9, 2019No Comments2 Mins Read
Facebook Twitter Pinterest LinkedIn Tumblr Email
Share
Facebook Twitter LinkedIn Pinterest Email
Air Chefs, a catering subsidiary of South African Airways (SAA), on Monday successfully interdicted industrial action by its staff.
In a statement, Air Chefs said it had approached the Labour Court with an application to interdict or stop the industrial action.
“The interdict was granted on Monday afternoon,” said the SAA subsidiary.
“This means should any members of NUMSA at Air Chefs continue with industrial action before this date, this will be deemed an unprotected strike as it is not in compliance with the strike provisions according to the Labour Relations Act,” said Air Chefs.
In addition to the interdict, Air Chefs management has taken steps to activate contingency plans to ensure minimal or no impact on all operations and to Air Chefs customers including the airlines it serves, should an unprotected industrial action take place. 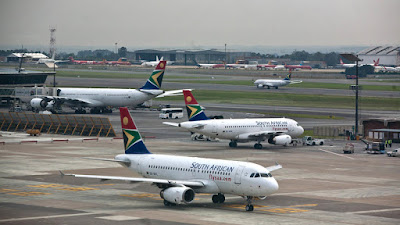 The strike, said the entity, had on Monday not caused operational disruptions.
The notice to strike emanated from NUMSA’s claims of “unilateral changes to their terms and conditions of employment”, in that according to the union an anniversary bonus payment arrangement has been amended by Air Chefs.
“The bonus payment is regulated by the Catering and Allied Bargaining Council Collective agreement and is therefore not a matter of mutual interest that NUMSA may strike over. Air Chefs’ position is that it is not in breach of the collective agreement relating to bonus payments but is in strict compliance thereto.
“Any dispute NUMSA may have on this matter must be adjudicated at the Bargaining Council through conciliation and arbitration,” read the statement.
Air Chefs said it remained committed to continued discussions with all unions represented in Air Chefs and will continue to conduct regular engagements with Labour.
The entity apologised for any inconvenience caused by messages suggesting there would be operational disruptions
Share. Facebook Twitter Pinterest LinkedIn Tumblr Email
Previous ArticleWind a green solution to energy
Next Article Water restrictions to remain in place as temperatures soar