In September 2017 South African Hockey released the 42-player greater squad on the back of the Under-21 Interprovincial tournament held in Potchefstroom. The rationale for the larger squad was shared by SA U21 convenor of selections Marcelle Keet as follows:
“This is the squad leading up to the 2019 Junior World Cup Hockey tournament. The coaching staff will have opportunities to work with varied groups of players, including but not limited to upcoming HP camps, the Premier Hockey League and the Senior Woman’s IPT.  The 2018 u21 IPT taking place later this year will give us an additional opportunity to review and grow the squad. Given the fact that the Africa Junior World Cup Qualifier, as well as the Junior World Cup dates, are yet to be announced we have taken a progressive approach to looking at age groups that will help us meet both these tournament requirements from age criteria.  We have focussed on two specific age groups and these being the age groups 1998/99 and 2000, as well as players born in the years 1996/97.” 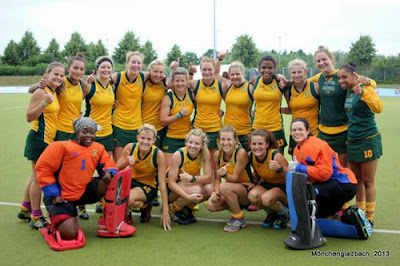 The full squad of ladies participated in the 2017 PHL in Randburg either via the Namaqualand Daisies or drafted into the other participating teams. The second opportunity now lies ahead as the invitational squad is released of the ladies that will play in the Senior Women’s IPT in Kwazulu Natal in April this year. This offers coach Robin van Ginkel a great opportunity to test out further combinations and ultimately help the selection panel make decisions about the final squad later this year.
“We have selected an exciting young, fresh and talented IPT team from a competitive squad. We had a very successful PHL and we are going to IPT not just to compete but to be a competitive force the dedicated, passionate and enthusiastic coach, Robin can Ginkel!. We are really excited for IPT and the next step of our U21 journey.” Shared Keet further.
Ongeziwe Mali will bring a new-found experience to the squad having spent some time in camp with the South African Women’s Hockey team preparing for the Commonwealth Games, while the remainder of the team features the most exciting names in South African Women’s hockey including Kirsty Adams, Simone Gouws, Sandisiwe Tabata and many more!

The destination of the gold gets clearer