Steenberg Utd, The Magic to fight till the end for WC ABC Motsepe title 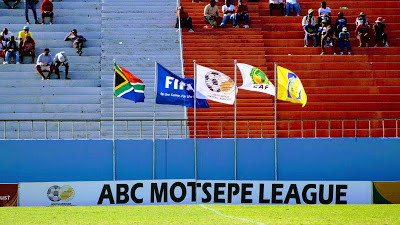 Share
Facebook Twitter LinkedIn Pinterest Email
The 2019 ABC Motsepe League Promotional Playoffs will be held in the Western Cape with the race for the Western Cape ABC League still on between defending champions Steenberg United and The Magic.
The defending champions are well on track of making two successive appearances at the National Play offs after accumulating 58 points in the 25 games they have played so far.
Steenberg will be hoping to build on their last match’s result where they defeated Santos 3-1. They will be on the road to face Jomo Powers whom they have comfortably beaten 5-1 in the first round.
Hot on the heels of Steenberg is The Magic FC, who enter this week’s round of fixtures sitting in second place and only four points behind the log leaders with a game in hand.
The Magic will be in action on Friday 12 April where they will be traveling to fifth-placed Ikapa Sporting where they will be gunning for revenge after a 3-2 defeat they suffered in the reverse fixture in December.
Just below the title race, the race to finish third is getting intense as well between  Zizwe United and Glendene United.
Separated by a single point after 26 games, the two teams will clash after the Easter break on Saturday, 27 April in a match which might decide who will finish in third place.
On Friday, 12 April, Zwizwe will travel to face HBU FC while Glendene will welcome Morning Stars at the Manenberg Stadium the following day.
Looking at further down the table, D&G Orient and Mbekweni Cosmos look set for SAB League football next season. With Orient and Cosmos left with only four and five games to play respectively, they find themselves 12 and 13 points away from safety. Above them in 14th place is FN Rangers who are safe with 26 points.
Cosmos and Orient will lock horns at the Faure Road on Saturday, with both teams looking to end their unwanted run of results. The hosts, Cosmos are currently in a 6-games losing streak whilst their visitors are winless in their last seven outings.
Share. Facebook Twitter Pinterest LinkedIn Tumblr Email
Previous ArticlePandor announces plan to build Mitchell’s Plain TVET College
Next Article Notoane buoyant ahead of clash with Zimbabwe