Notoane buoyant ahead of clash with Zimbabwe 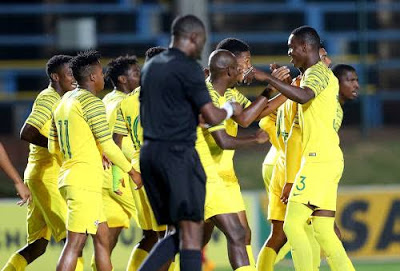 The South African Football Association (SAFA)’s Vision 2022 is well on track with the current U-23 Men’s National Team well on their way to qualifying for the CAF U23 African Cup of Nations, to be staged in Egypt from 8 -22 November 2019, according to coach David Notoane.
South Africa beat Angola 6-1 on aggregate (3-1 away and 3-0 at home) in their first round of qualifiers and will face Zimbabwe in a two legged qualifier on 5 June 2019 at home and away in Zimbabwe on 9 June 2019.
The winner of the encounter will qualify for the 8-Nation tournament in Egypt in which top three teams in the continental showpiece will qualify for the 2020 Olympic Games to be staged in Tokyo, Japan.
The current crop of the U-23 Men’s national team have international experience having played in the U-17 and U-20 World Cup, while many are regular starters in their respective professional clubs locally and internationally.
“We are looking forward to the next round of qualifiers (against Zimbabwe) and are very eager to qualify for our second consecutive Olympic Games as a country. The U-23 Men’s National Team is a great stepping stone for players to either grow in their current teams or be advertised at international level,” said Notoane.
The coach said the 2016 Brazil Olympic Games allowed for players like Keagan Dolly, Thapelo Morena and Lebogang Mothiba to make big moves post the tournament. He said the same will happen for the likes of Teboho Mokoena, Luther Singh, Kamohelo Mahlatsi, Sandile Mthethwa among others in the team.
“It is important that the players remain consistent at club level so that we achieve this goal of qualifying for the AFCON as well as the Japan Olympics,” concluded Notoane.

Steenberg Utd, The Magic to fight till the end for WC ABC Motsepe title