By Tshwane BulletinMarch 24, 2019No Comments2 Mins Read
Facebook Twitter Pinterest LinkedIn Tumblr Email
Share
Facebook Twitter LinkedIn Pinterest Email
The Muslim Party ALJAMA-AH has taken the lead to have strong gender parity, youth empowerment, struggle stalwarts and representation outside its faith in its 14 party lists submitted to the IEC for the 2019 Provincial and National Elections says Party Leader Ganief Hendricks. The Party is well set to have the balance of power in the Western Cape and looks forward to topple the Democratic Alliance from power because of its position on events in Palestine and its response to the  brick by brick destruction of Islam’s third holiest sacred mosque Masjidul Aqsa and its Day Zero fiasco and crippling water tariffs and cruel water cuts and high water bills. 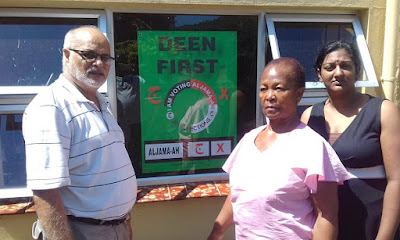 The Party’s position is to have real multi-party rule with non politically aligned Executive Directors overseen by the NGO leadership in the Western Cape. On its Party list for the Western Cape the Party has community activists outside its ranks to ensure grassroots civic rule and not the rigid white dominated hard fisted  male rule that the province has become known for.
Women dominate the top five positions on its party lists.
For a Muslim Party that sends a strong signal that the Muslim community is at an advance stage to play a more active role in the political life of the country to make South Africa a welfare state on its way to get rid of inequalities.
A women struggle activist from the leading liberation first family  is No 1 on one of its regional lists that will bring vast experience and stature to the Legislature. The silver bullet for the Party is a student listed no 2 on its national  Party list  who is not only black but a Muslim female teenager with a clear agenda that young people should legislate its own future.
Share. Facebook Twitter Pinterest LinkedIn Tumblr Email
Previous ArticleSenior citizens taken on excursion by police
Next Article Mzansi counts down to Election Day