UWC Ladies lead the pack in the Sasol National Champs

Day two of the 2018 edition of the Sasol League National Championships proved to be a tough battle for some of the tournament favourites.
The opening match of the women’s national championships saw Durban Ladies draw 0-0 with First Touch Academy after their epic day one performance. The goalkeepers were the stars of the show with First Touch Academy’s goalkeeper Victoria Muroa walking away with the Diski Queen award.
TUT Ladies made their come back to the national championships with a 2-0 win over Thunder Birds FC Goals from Busisiwe Ndimeni and Elizabeth Mashilo in the 72nd and 79th minutes respectively.
Western Cape’s UWC Ladies closed off Day 2 with the steal of the day as they qualified for the semi-finals with a late goal. 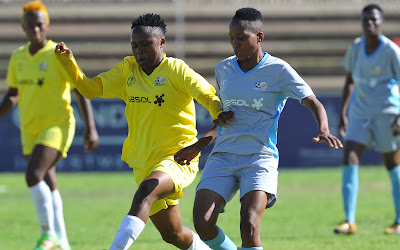 Molatelo Koba 84th minutes helped the young students secure their spot in the semi-finals scheduled for Friday, 7 December, as they await their opponent which will be finalized in Day 3’s action.
Day 3 of the 2018 Sasol League National Championships will see TUT Ladies opening the day against Golden Ladies at 10h30.
Thunderbirds will look to ensure that defending Sasol League Champions Bloemfontein Celtic Ladies are knocked out of the tournament at 13h00; while First Touch Academy will take on Richmond United at 15h30.
The winners of the 2018 Sasol League National Championships will walk away with R200 000; while the runners up will receive R100 000. The bronze medallist will receive R60 000.

Banyana Banyana drawn in tough group at the 2019 FIFA WWC