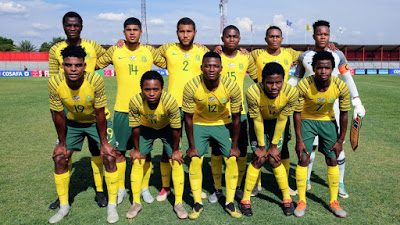 South Africa’s National Under-20 (Amajita) side will face Zimbabwe in this year’s COSAFA Under-20 Championship final.
This comes after Zimbabwe subjected hosts Zambia to a 2-1 defeat on Tuesday, following Amajita’s 1-0 win over fellow semi-finalists Angola at Nkana Stadium in Kitwe, Zambia.
That COSAFA final match will kick-off at 15h30 at Nkana Stadium on Thursday, 13 December.
Amajita coach Thabo Senong said he was extremely pleased with how his charges performed in their previous matches, adding that they just need to finish this tournament on a high as well.
The COSAFA defending champions have scored a total 10 goals in their last three matches, and are yet to concede a goal in this year’s tournament.
“We are very pleased with the team’s performance so far in this tournament, given the fact that we had a very limited amount of time to prepare for it,” Senong said.
“We scored a decent number of goals while making sure that we do not concede as well. This goes to show that we are one of the ambitious teams in our region and the African continent as well. We can only continue building from our previous performances, while keeping a sharp focus on the job that is at hand now.”
Senong added that his side will do well not to undermine their opponents, stating that this mental approach will see them achieving their main goal.
“Zimbabwe has enjoyed an impressive run so far in this year’s tournament,” Senong said. “They brought in a good players who know how to attack. We just need to respect them, plan very well and come up with a proper game plan to help us win the match.”