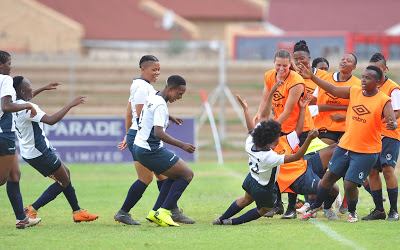 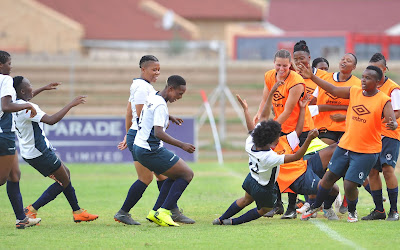 The 2018 edition of the Sasol League National Championships semi-finalists were concluded on Thursday, 6 December in Galeshewe, Kimberley.
The University of the Western Cape were the first team to qualify for the semi-finals, while TUT Ladies left it until late to join the Capetonians.  Goals from Letago Madiba and Rachel Sebati in the 50thand 59thminute gave the Pretoria based students a 2-1 win over Golden Ladies, to secure their second 3 points of the tournament and qualify for the semi-finals.
Durban Ladies finished top of Group B with 4 points and automatically qualified for the semi-finals.
Defending Sasol League Champions Bloemfontein Celtic Ladies gave it their all against Coal City Wizards to win their first match 4-1, but this was a little too late for the champions, as they were eliminated from the tournament.
First Touch Academy beat Richmond United 6-3 to finish the group stages as best runners up. Molatelo Sebata and Tlaki Matlakaneng) scored braces while Maureen Morudi and Reneilwe Radingwana also assisted to give First Touch Academy their first ever spot in the semi-finals.
Day 4 of the 2018 Sasol League National Championships see Coal City Wizards vs Golden Ladies in the 7th/8th place play off at 09h00 and Bloemfontein Celtic Ladies will take onThunderbirds  in the 5th/6thplace play off at 11h15.
The first semi-final of the 2018 Championships will take place at 13h30 between UWC Ladies and Durban Ladies; while TUT Ladies will host First Touch Academy in the second semi-final at 15h45.
The final of the Sasol League National Championship will be on Sunday, 9 December 2018, at the same Galeshewe Stadium.
The winners of the 2018 Sasol League National Championships will walk away with R200 000; while the runners up will receive R100 000. The bronze medallist will receive R60 000.
Other Prize monies:
Fourth place – R40 000
Fifth place – R30 000
Sixth place – R25 000
Seventh place – R20 000
Eighth place – R15 000
Ninth place – R10 000
Share. Facebook Twitter Pinterest LinkedIn Tumblr Email
Previous ArticleDebutants TUT Ladies crowned 2018 Sasol League National Champions
Next Article UWC Ladies lead the pack in the Sasol National Champs