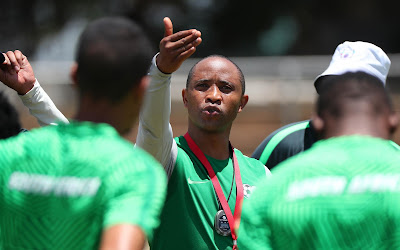 South Africa’s National Under-20 (Amajita) defender Njabulo Blom is confident that his side will come out with a winning result when they face Angola in a COSAFA Under-20 Championship semi-final tie on Tuesday at Nkana Stadium.
That match will kick off at 13h00.
In order to achieve that though, Blom stated that they would need to apply every tactical instruction coach Thabo Senong gave to them in their final training session held at Lechwe School’s training grounds in Kitwe, Zambia on Monday.
“All credit must go to the coaching staff for leading us to where we are now in this tournament,” Blom said. “We won two of our Group B matches without conceding a single goal.
“The coach always tells us to never undermine our opponents, and always work hard towards pushing for desired results in every match. This is one team that is always willing to learn and we intend on building on our previous two performances in this Angola clash.”
Meanwhile, Senong said he was pleased with how his tactical session went, adding that they are now ready for the Angola semi-final battle. All semi-final matches will go straight into penalties, should either match end in a draw.
“We had a good training session building up to our semi-final clash against Angola,” Senong said.
“We worked on a few tactical areas which I believe will be key in helping us to do well on Tuesday. Tournament football is more results driven. You have to be very direct in your play, score goals and be very solid in the defensive third. We have woredk on all of those areas in this session and our ambition now is see this team in the final.”