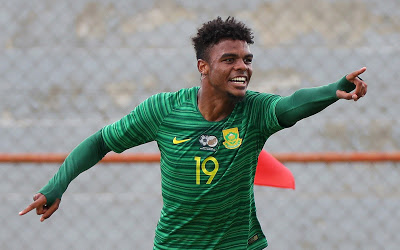 Lyle Foster of South Africa celebrates goal during the 2018 COSAFA U20 Championship Semifinal football match between South Africa and Angola at Nkana Stadium in Kitwe on 11 December 2018 ©Chris Ricco/BackpagePix
Share
Facebook Twitter LinkedIn Pinterest Email
South Africa’s National Under-20 (Amajita) progressed to this year’s COSAFA Under-20 Championship final after beating Angola 1-0 in the semi finals at Nkana Stadium in Kitwe, Zambia.
A goal by Lyle Foster in the first period of the match was enough to see the defending champions edge an Angolan side who came into this tie with the intent to win.
Amajita will now face either hosts Zambia or Zimbabwe on Thursday, 13 December at 15h30. 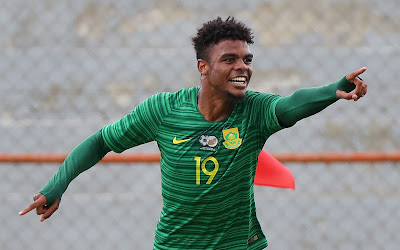 In the first period of the match, Amajita showed great enthusiasm pressing forward while maintaining their shape from the back pressing forward. Foster’s goal came in the 26th minute when he received a deep superb pass from midfield maestro, and eventual man of the match Nkosingiphile Ngcobo.
Foster simply evaded his marker before shooting past the opposition’s goalkeeper to give Amajita the needed lead. In the second period of the match, Amajita opted to play defensively to deny an Angolan side who threw everything their way in pursuit of a comeback.
The defending champions denied them every scoring opportunity, while also pressing forward and creating opportunities of their own to increase their lead.
This win also means that Amajita have gone three matches in this COSAFA tournament without conceding a single goal or defeat.
Share. Facebook Twitter Pinterest LinkedIn Tumblr Email
Previous ArticleSouth Africa to face Zimbabwe in COSAFA Cup final
Next Article Amajita ready for Angola semi-final battle