Tshwane University of Technology Athletics Club runner, Mpho Motaung has set his sight on qualifying for the World Student Games to be held at Napoli in Italy, this comes after the 24-year student outran fellow runners to win the BDS Marathon held at Wonderpark Shopping Centre recently. 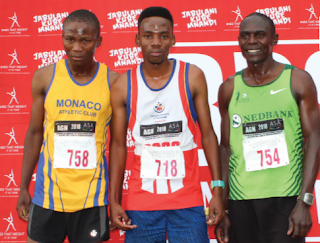 The excited runner said the marathon was in line with his preparation for next season as the bigger picture is to get better in order to qualify for the games. “My preparation has been satisfying and I am happy with my performance today.

I want to be the best at it, credit must also be given to fellow runners as  they were also well prepared

I have more than ten years of running and I want to be the best at it, credit must also be given to fellow runners as they were also well prepared,” said Motaung. Thabang Matlou followed suit and claimed the second spot whilst Kenyan runner Chirchir Kipkoech came third

Fellow student runner Thembi Baloyi, came top to win the ladies category as TUT made a clean sweep at the race and ascend the podium. Runners both young and old young and old woke up in the early hours of the morning to partake in the race as good weather prevailed.

BDS Chairman Mashilo Kouane said; “I am very happy that everything went very well, the turnout is satisfying as runners are using this race as preparation for the Soweto marathon.  From our side we didn’t have much trouble pertaining to logistics